Medtrition strives to provide the most current and relevant industry knowledge to our customers as well as important product updates and introductions from our full line of medical foods and purees. Please see the below posts for the current happenings at Medtrition along with other important topics and enter your email in the footer of this page to subscribe and get the latest news delivered to your email inbox.
Home › Blog › Increase patient satisfaction with frozen thickened dairy

An article published the April 2016 edition of Today’s Dietitian stated that a key factor in successful dysphagia management is patient compliance and referred to a study in which 45% of survey respondents found that eating was no longer an enjoyable experience. In the survey, thickened liquid ranked lowest in patient satisfaction. 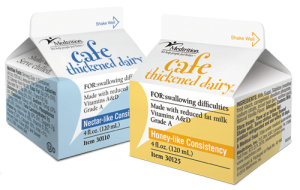 Aseptically processed thickened milk has the lowest patient acceptability of all thickened liquids. The facility surveys we have taken have shown that nearly 90% of residents disapprove of aseptically packaged thickened milk due to it being processed at very high temperatures which ‘over –cooks’ the milk giving it its characteristic yellow color and over-thick consistency.
We are proud to make fresh frozen Café Thickened Dairy in 4 oz. milk cartons. It actually looks and taste like milk! Our own studies have shown that virtually 100% of residents prefer Café Dairy in side-by-side comparisons to aseptically processed thickened milk.
An RD recently wrote to us saying that they had compared their aseptically processed thickened milk to Café Dairy with their dysphagia residents: “Every resident gave Café Dairy fantastic reviews. There was one lady in particular that stole the show; she was non-verbal but seemed to be very aware of what was going on. The Geriatric Nurses Aid and dietary staff all said she refuses to drink the aseptic milk they served every day. After the GNA gave her a few sips of the Café Thickened Dairy, she leaned her head back cracked a big smile. All the GNA’s were so excited and couldn’t believe her reaction, I could see a few of them getting teary eyed.  After we tested the rest of the residents, maybe 15 minutes later, we came back up to her dining room and she had finished the whole carton! “
Facilities can dramatically increase patient/resident satisfaction, reduce waste and reduce serving costs by as much as 40% by serving fresh frozen Cafe Thickened Dairy.