Medtrition strives to provide the most current and relevant industry knowledge to our customers as well as important product updates and introductions from our full line of medical foods and purees. Please see the below posts for the current happenings at Medtrition along with other important topics and enter your email in the footer of this page to subscribe and get the latest news delivered to your email inbox.
Home › Blog › Can cranberries prevent recurrent UTI's?

Urinary tract infections (UTI’s) account for 20-30% of infections in Long Term Care and the most common cause of  hospitalization for bacterial infection. It has been common practice to prescribe antibiotics to these patients, even when they are asymptomatic. This approach, however, often does more harm than good, leading to increased rates of adverse drug effects and more recurrent infections with drug-resistant bacteria. 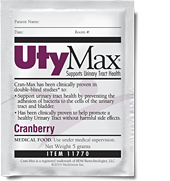 UtyMax with 500 mg of CranMax, a pure cranberry concentrate, offers a clinically proven  alternative to antibiotic use. In a randomized, controlled, published clinical trial, 137 women who experienced two or more urinary tract infections treated with antibiotic in the previous 12 months were selected to receive either 500 mg of CranMax  or 100 mg of trimethoprim per day for six months.
The researchers found that the time of first recurrence of the UTI was not significantly different between groups. The researchers concluded that in the first head-to-head, double-blind comparison of cranberry versus antibiotic prophylaxis, trimethoprim had a very limited advantage over CranMax in the prevention of recurrent UTIs in older women, while Cran-Max produced none of the adverse effects associated with trimethoprim, including diarrhea, upset stomach and yeast infection. In addition, trimethoprim is contraindicated for warfarin and should not be taken together.
UtyMax can be used prophylactically to prevent recurrent Urinary tract infections.