Medtrition strives to provide the most current and relevant industry knowledge to our customers as well as important product updates and introductions from our full line of medical foods and purees. Please see the below posts for the current happenings at Medtrition along with other important topics and enter your email in the footer of this page to subscribe and get the latest news delivered to your email inbox.
Home › Blog › Does fluid count in Gelatin?

Does fluid count in Gelatin?

Recently we have been asked if our Gelatein line of high protein gelatins  count as ‘fluid’, the same way Jello brand gelatins are.
The percentage of water in Gelatein 20 and Gelatein Plus are as follows:

The difference between Gelatein and Jello is that  Jello is thickened and stabilized with gelatin which is easily broken down by the amylase in the mouth and the acid in the stomach.  ProSource Gelatein’s are stabilized using carrageenan and locust bean gum  in which some of the water is carried through the digestive system as is typical with gum based stabilizers. The science on this is not exactly perfect but the manufacturers of both gums have recommended that less than the full amount of water – as much as 50% – in the formulation not be counted for hydration- that would mean that approximately 1.3 to 1.55 ounces of water per 4 oz cup be counted as fluid.
With 20 grams of protein per portion, Gelateins are the perfect high protein supplement for clear liquid diets, pressure injuries, wound healing, dialysis, bariatric, COPD, oncology, protein deficiency, HIV and the dysphagia diet and many other conditions where additional protein is required 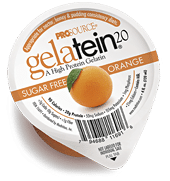 If you would like a sample of our delicious high protein Gelatein please write to inf0@medtrition.com